Pay Data Reporting Is Back (For Now)

After a tortured history, the EEOC’s pay-data collection requirements are back! At least for now.

Consistent with some recent federal court rulings, all employers with 100 or more employees, as of now, must submit summarized pay data for all employees for 2017 and 2018 to the EEOC by September 30, 2019. The government is appealing the court rulings, and there still is a possibility that the pay-data reporting will not happen. But pending appeal and further details regarding the format and process for reporting employee pay data, employers should begin now to collect and review 2017 and 2018 pay data and to clean up any errors.

In 2014, President Obama directed the EEOC to develop a tool for collecting pay data from employers. In September 2016, the EEOC announced that pay-data collection would be incorporated into employer’s annual EEO-1 reports, beginning in December 2017. The initial proposal required EEOC to collect pay data for at least twice before September 30, 2019.

The EEOC regulations required employers to report, within each of the 10 EEO-1 job categories and 14 gender, race, and ethnicity categories, how many employees gross W-2 wages for the prior 12-month lookback period fall within each of 12 different pay bands. The regulations also required employers to report aggregated hours worked by employees during the 12-month period.

For example, see below or click here to view the sample form for pay data in just one job category. 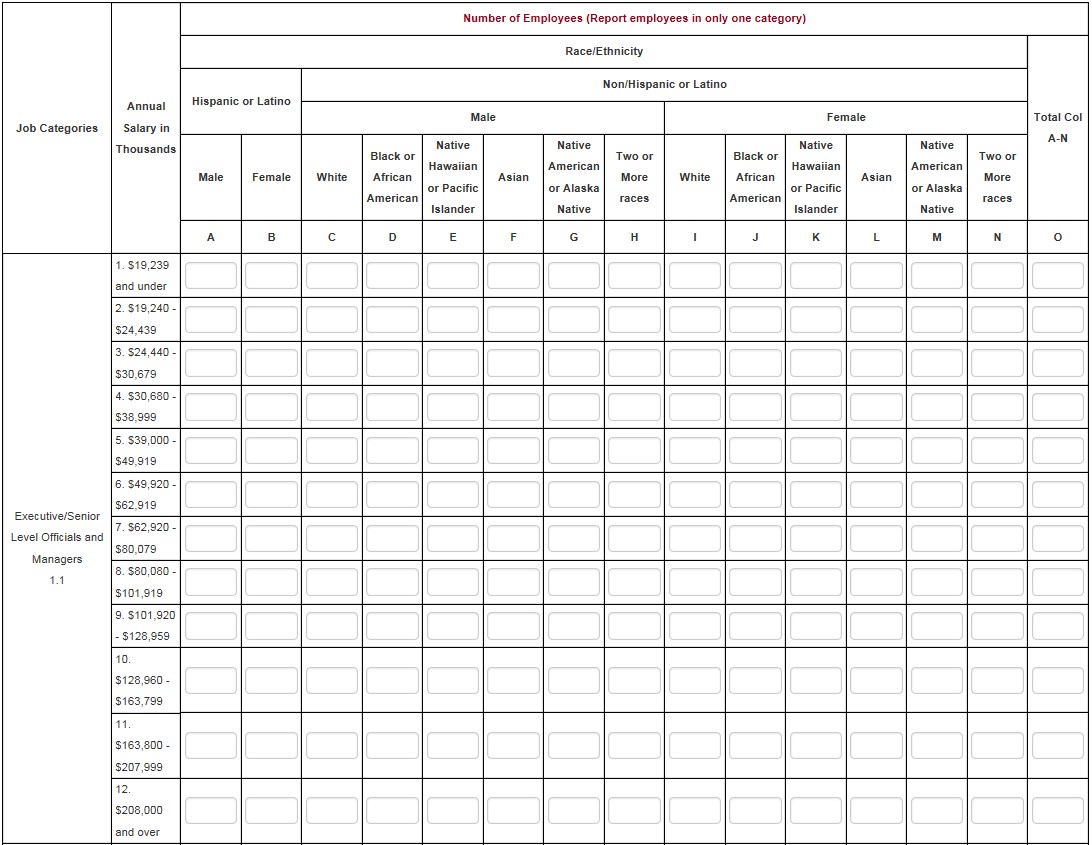 But before the first set of data was collected, the administration changed. The Office of Management and Budget (OMB), which had approved the regulations during President Obama’s final term, put them on ice after President Trump’s election, purporting to review the cost of compliance under the Paperwork Reduction Act.

Two advocacy groups—the National Women’s Law Center and the Labor Council for Latin American Advancement—sued the OMB in November 2017, claiming that the OMB had no basis to stay the pay-data collection rules and asking the court to force the EEOC to start collecting pay data.

In a surprising ruling from the U.S. District Court for the District of Columbia in March 2019, the court lifted the OMB stay and directed the EEOC to begin collecting pay data. But the EEOC was not prepared for that order, and it had not put into place any means for collecting pay data from employers.

But notwithstanding the EEOC’s efforts to comply with the district court rulings, the government has appealed the district court’s rulings to the D.C. Circuit Court of Appeals. This appeal does not automatically stay the court’s rulings, but the government could ask the appellate courts to put those rulings on hold until it can decide whether the EEOC has to collect pay data.

As of now, the pay-data collection and reporting requirements are in effect, and employers should be preparing to comply. The data-file requirements and reporting process are still unknown, as the reporting infrastructure has not been built yet. The EEOC is working with an outside vendor to create the reporting infrastructure, and it purports to be on track to begin collecting 2017 and 2018 pay data by July 15, 2019. The EEOC will provide further instructions on the mechanics of submitting this data over the next several weeks. But employers can start preparing now by collecting and reviewing calendar year 2017 and 2018 pay data (all W-2 wages and hours worked) to clean up any errors prior to submission.

In the meantime, employers should remember that the deadline for the traditional EEO-1 reports (number of employees by EEO-1 job category and gender, race, and ethnicity category) remains unchanged, and employers must submit these reports by May 31, 2019.

If you have questions or want more information regarding the EEOC’s pay-data collection regulations, contact your legal counsel. If you do not have regular counsel for such matters, Foulston Siefkin LLP would welcome the opportunity to work with you to meet your specific business needs. You may contact Charles McClellan at cmcclellan@foulston.com or by calling 316.291.9764. You may also contact Boyd Byers, Employment and Labor Practice Group Leader, at bbyers@foulston.com or 316.291.9716. For more information about Foulston Siefkin, please visit our website at www.foulston.com.

This update has been prepared by Foulston Siefkin LLP for informational purposes only. It is not a legal opinion; it does not provide legal advice for any purpose; and it neither creates nor constitutes evidence of an attorney-client relationship.