Get to know Harvey R. Sorensen

Harvey Sorensen, a Foulston Siefkin senior partner, is one of the most well-respected corporate and business law attorneys in Kansas and an influential force in Wichita’s ongoing transformation as one of the country’s premier centers for innovation, technology, and education.

With more than four decades of experience in mergers, acquisitions, taxation, and general corporate matters, Harvey offers not only the knowledge of a seasoned professional, but also a relentless enthusiasm for advancing his clients’ interests and obtaining bottom-line results. His clients include established global manufacturers, national hospitality companies, franchisees and franchisors, investors, emerging technology companies, entrepreneurs, and closely held and family-owned businesses.

One of Harvey’s most visible accomplishments can be seen today as Wichita State University’s Innovation Campus evolves. He played an instrumental role in helping the university take the steps necessary to move the project forward by crafting the complex legal and business structure needed to accommodate the various interests of state and local governments, businesses, higher education, community leaders, and residents. The extensive undertaking, which involved forming public-private partnerships (PPPs), building new infrastructure, and bringing diverse groups of stakeholders to the table, is testament to Harvey’s commitment to both his clients and his community.

Harvey has relentlessly championed Wichita as a vibrant destination for companies seeking a business-friendly climate with an experienced, talented workforce. His efforts also helped retain major employers that contemplated moves to other states. Harvey has served in leadership roles for some of the state’s most influential business and civic groups, including Visioneering Wichita’s Steering Committee, the Kansas Governor’s DMV Modernization Task Force, the Wichita Chamber of Commerce, and the Wichita Technology Corporation. Active in many cultural, charitable, and educational organizations, he has served as chair of the historic Orpheum Theatre’s Board of Directors since 2012 and is very involved in its preservation efforts.

Harvey’s vision also extends to the global market as well. He helped elevate Foulston Siefkin’s reputation for excellence when it was invited to be a founding member of Lex Mundi, the world’s leading network of independent law firms, and continues to be the firm’s Lex Mundi representative. Harvey is also a member of Geneva Group International, one of the largest multidisciplinary professional associations in the world; an American College of Tax Counsel fellow; and is regularly cited for excellence by Chambers USA and other publications.

A resident of Eastborough, Harvey and his wife have four adult children and six grandchildren. In addition to spending time with his family, he enjoys playing golf, cheering on the Cubs, and traveling to places that include stops at vineyards, where he often discovers new wines to add to his collection.

Get to know Harvey R. Sorensen 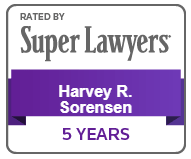