His clients gather the key information, weigh the alternatives, determine the best course, and are not afraid to act. Tony is there for them when those decisions are challenged.

Tony is the partner-in-charge of the Kansas City office and a member of Foulston’s litigation & employment practice group. He represents large and small businesses, colleges, universities, and municipalities. Tony tries cases before juries, judges, and arbitrators. He argues appeals in state and federal courts.

Tony was recognized by Best Lawyers® as the 2022 Litigation – Municipal “Lawyer of the Year" in the Kansas City, Kansas area. Tony is listed in Chambers USA as a leading general commercial litigation attorney in the United States, named by Benchmark Litigation as a Local Litigation Star, and enjoys Martindale-Hubbell Law Directory’s highest “AV” rating for lawyers. He was selected by his peers for inclusion in the Missouri & Kansas Super Lawyers® list.

Tony’s advocacy for business extends beyond his clients. He serves as the 2022 Chair of the Board Overland Park Chamber of Commerce, and on the 2021 executive committee of the Overland Park Economic Development Council. He is a past chair of the Chamber’s Public Policy and Advocacy Committee. 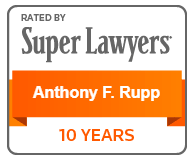